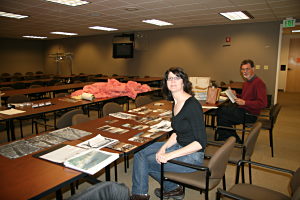 In March of 2009 and again in August of 2011, the Cooper Research Team was given unprecedented access to the FBI Archive to examine the physical evidence from the Cooper hijacking and files first hand. The vast majority of the evidence consisted of suspect profiles which covered several feet of shelf space as described by Special Agent Larry Carr. Access to personal profiles was not granted in order to preserve the privacy of individuals. The items recovered from the airplane after it landed in Reno, subsequent photographs and testimony from the crew and passengers, were all reviewed in detail. The FBI has requested that specific information not be released publicly, so this is an overview of the evidence.

Original photographs documenting the excavation of Tena Bar [1] following the discovery of the money by Brian Ingram [2], provided new information that allowed recovery of the exact location of the money find.

"pressure bump" was recreated by dropping a 230 LB weight off the stairs in flight over the ocean in the same configuration as the night of the hijacking.

Cooper's tie has been stored in the archive since the hijacking in 1971. During the first examination in 2009, multiple sticky tape and scanning electron microscope (SEM) stub samples were lifted from the tie. The focus at that time was to look for pollen that would suggest where in the country Cooper possibly hailed from. The tie produced many important finds even though only about 1 sq. inch was sampled. Subsequently in 2011 during a return trip to the Archive, the tie was thoroughly sampled using a variety of techniques including, ultra violet light (UV), laser florescence and forensic vacuum for high-density particle collection as outlined in other parts of this study.

the cut shroud lines inspected. The record shows conflicting numbers of either two or three parachute cords that were cut. At the time of inspection it was discovered that, five cords were missing from the chute. It is not known if the original reported number was wrong, or if cords were removed subsequent to the recovery of the parachute. The canvas container had been completely severed from the parachute. Inspection of the ends of the cords shows that each cord had been individually tied to a rope backbone in the container. Each of the cords had been individually separated from the backbone by slicing through the knot with a knife. The transcripts describe Cooper having a pocket knife in his possession during the hijacking. The reserve container was obviously too small to contain the entire bundle of money and the extra time he took to sever each knot instead of cutting the cords wholesale remains an enigma.

The Amboy parachute was not available during the inspection and it was not clear if that evidence was archived in the Seattle FBI office. We concur with others who originally forwarded the idea [4], that the Amboy chute is not silk but a first generation nylon parachute. The research team has a standing offer with the FBI to return to Amboy and excavate the location where it was discovered. To this date the only available information on the sewn-closed reserve chute that Cooper left the plane with, was that it was white in color. The Amboy Chute remains an item of significant interest.

The placard [5] that was recovered from the woods north of Portland, remains in the custody of the local police department where it was found. The placard was not examined but the original find location was confirmed in conversation with the original discoverers and is outlined further in the Flight Path part of this study.

Complete bills and money fragments recovered from Tena Bar were examined. Contrary to popular reports [6], there were only a few fragments in plastic boxes and no indication that there was a quantity of fragments found or any information on exactly where they were recovered. FBI agents carefully combed the site on Tena Bar from Tuesday, February 12, 1980 to Saturday, February 16, 1980. The original three bundles of money were found about 20 yards from the water's edge under a thin layer of sand, approximately 3 inches down. Additional scraps of money were found on Wednesday, February 13, 1980.

Overall the evidence was sparse. Cooper knew of the potential repercussions of leaving evidence behind and requested his hand-written notes back. The eight Raleigh filter-tipped cigarette butts that Cooper smoked on the plane were recovered during the initial investigation in Reno, NV and would be an excellent source of DNA but, according to Special Agent Larry Carr, their whereabouts have been unknown for some time. The thoroughness of Cooper's attempts to not leave any evidence strongly suggests that he left the tie on the plane by accident. Even if this case occurred today the evidence would still be limited.

1. Tena Bar is a sandbar/beach along the Columbia River just north of Portland. In 1971 it was a popular spot for fishermen and beach goers.

2. Brian Ingram was a young boy picnicking with his family on Tena Bar in 1980. He was digging a fire pit with his arm when he discovered three bundles of Cooper cash just below the surface.

3. During the hijacking, the pilot was in almost constant communication with the people back at Northwest Airlines. During this conversation, the pilots and flight engineer in the cockpit felt a change in cabin pressure in their ears and the flight engineer saw the cabin pressure gauge fluctuate. At that moment  Captain Scott remarked that Cooper might have jumped. This event became known as the "pressure bump" and was reproduced days later over the Pacific Ocean with the same plane.

4. To the best of our knowledge, author Robert Blevins first forwarded the idea that the Amboy chute was not made of silk on the Dropzone forum. Research shows that it is very likely a first generation nylon parachute that did not have the typical Ripstop checkerboard pattern.

5. While the aftstairs were down in flight, the turbulent wind broke a warning placard off the stairwell. This placard was eventually found by a hunter in November 1978 near Toutle, WA.

6. The money find at Tena Bar had reports of "fragments" found with the bundles. This led to much modern speculation about the amount and location of the fragments.